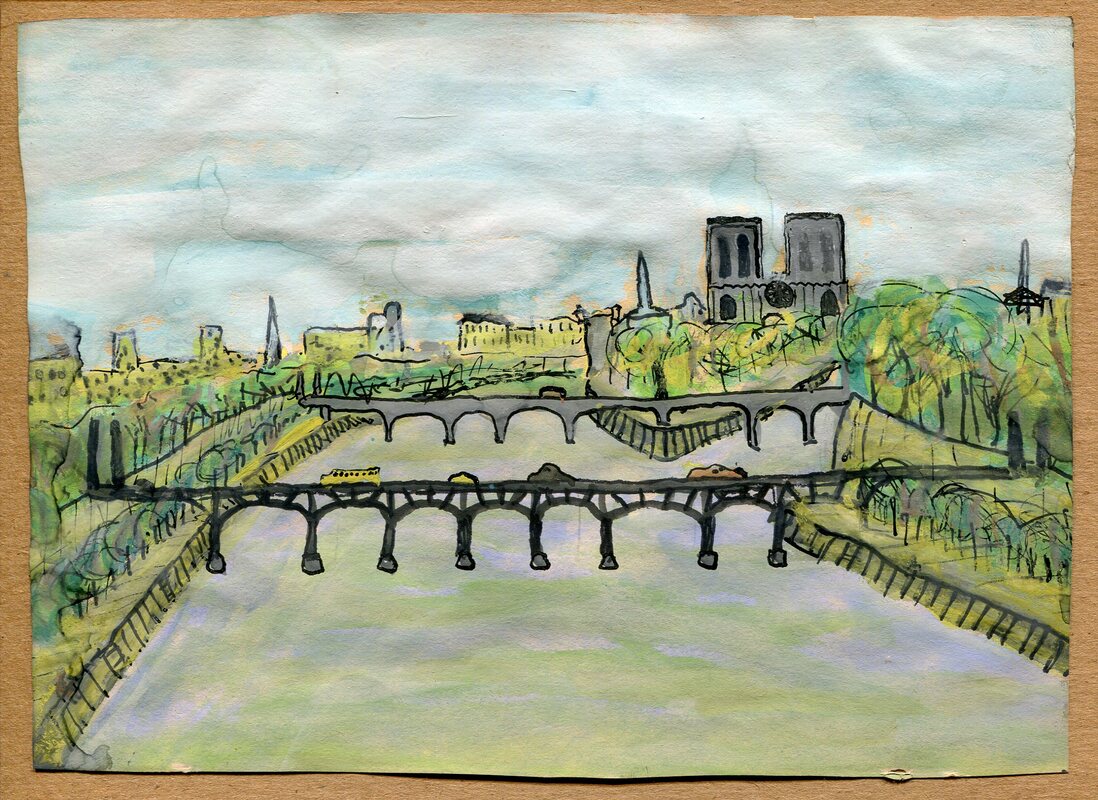 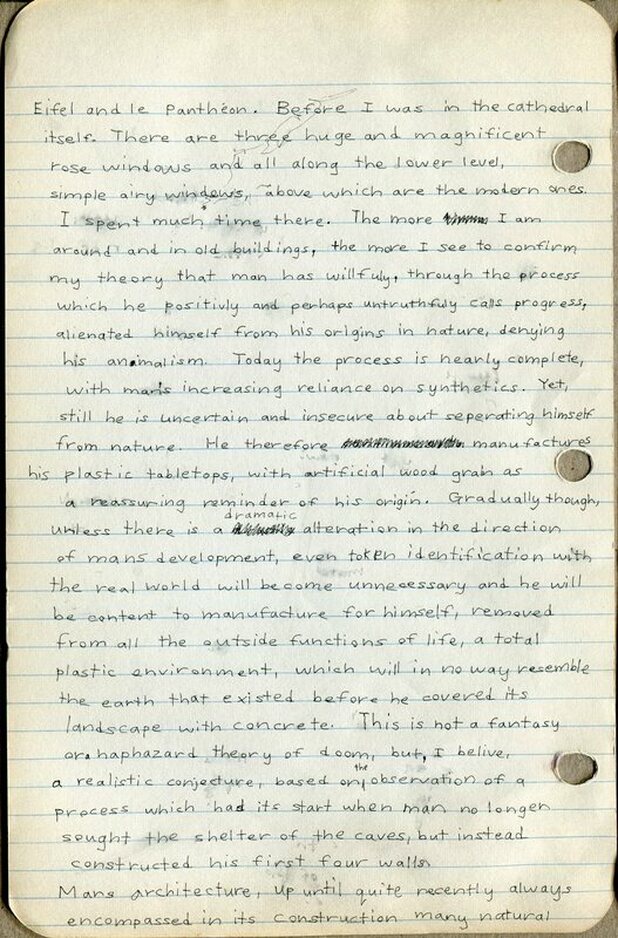 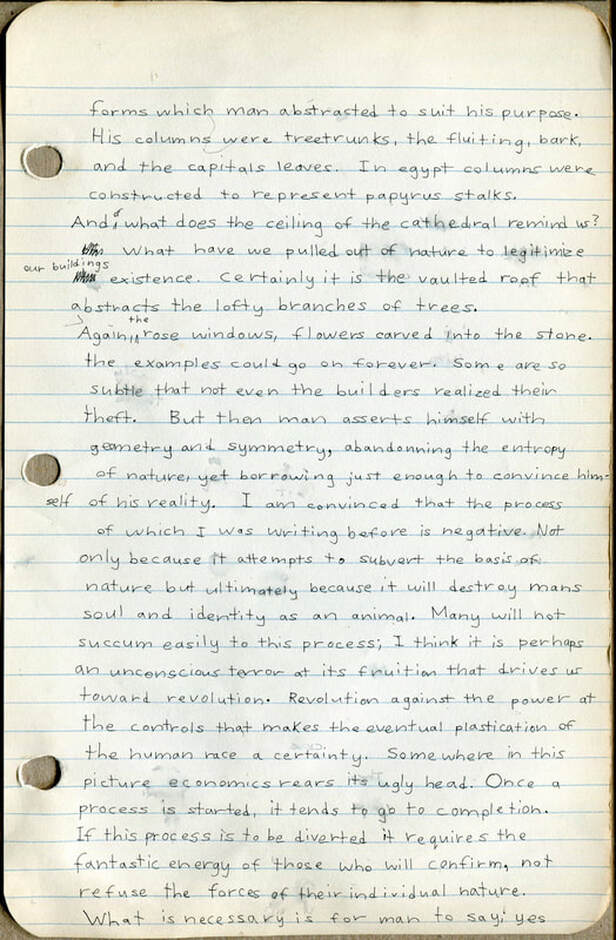 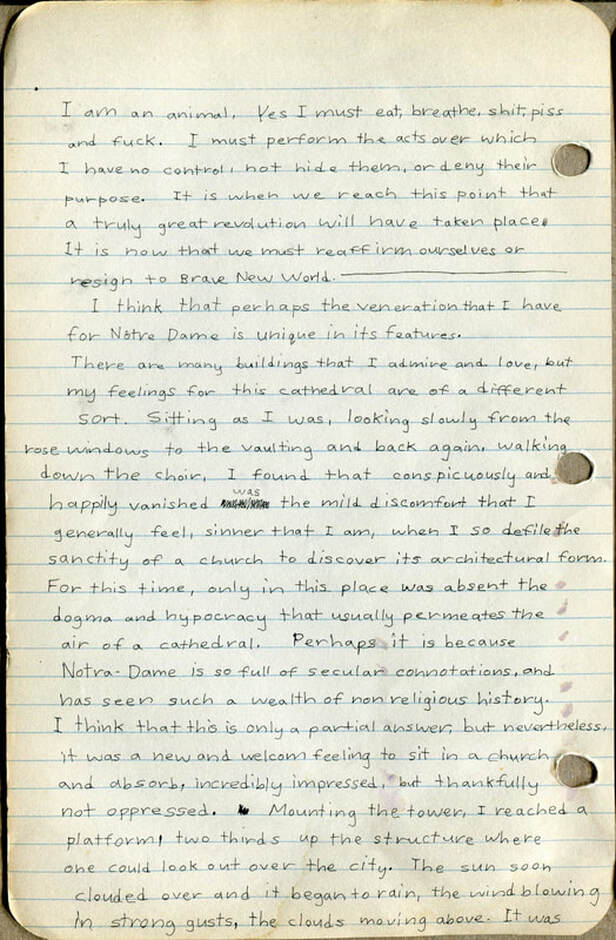 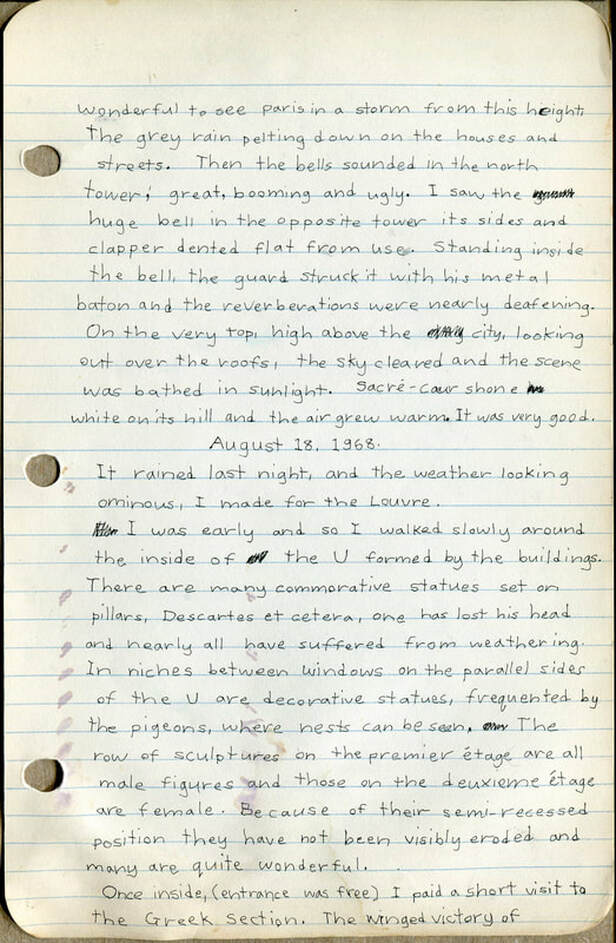 ​​Three years later, Philippe Petit made his transit between the towers. 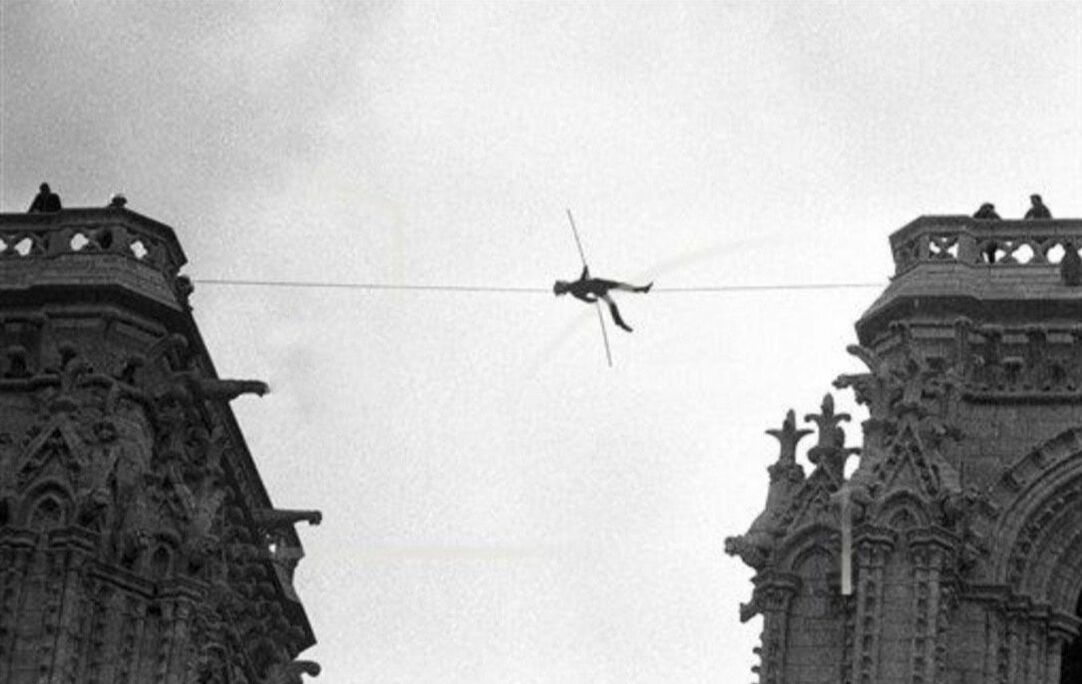 ​​I would not visit Paris, nor Notre-Dame again until 1986, this time with my wife, Katie. 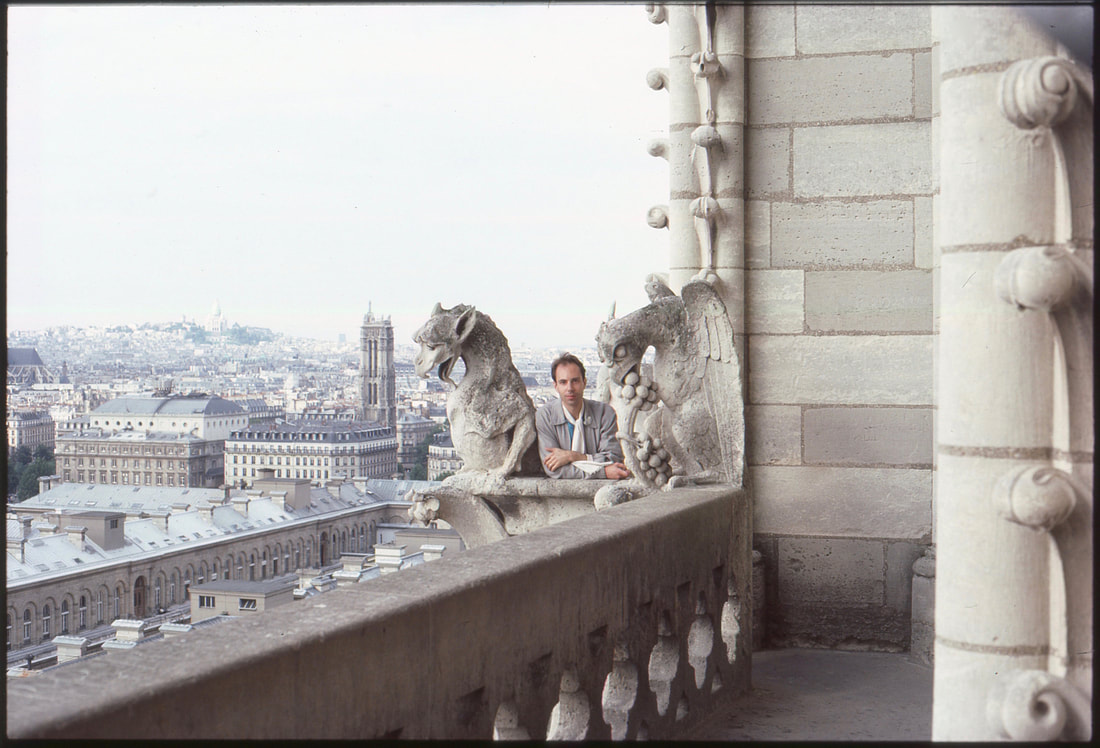 The author in September, 1986. Photo: Katie Kehrig.
In summer 2001, Katie and I visited Paris with our then-nine year old daughter, Gwen. It was her first time there. Again, I made journal entries:

July 22
Early this morning, Sunday, to the bird market on Île de la Cité near Notre-Dame where Gwen fell under the thrall of a tiny bright orange canary. You convinced her of the logic of not buying it, but nonetheless she named it: Mango.

July 27
Picnic lunch on a bench in the children’s sand park beside the flying buttresses of Notre-Dame. Gwen falls into company with two sisters, Kautar – about her age – and Bouchra, a year or so older. Uncharacteristically flustered, Gwen at first runs back and forth from her playmates to you – “but I don’t speak their language!” – though before long Bouchra shanghaies her into their game.  They take turns piling sand into a little hopper, then releasing it to fall through a chute and spin the little wheel below.  Soon the three of them arrive at a workable mode of communication:  gestures supplemented with rebus shapes drawn in sand, decoded, then swept away. Gwen points to a scarlet patch on her shirt then draws a pencil in the sand, signifying “this is how it is written,” followed by the letters “R - E - D.”  And back and forth it goes.

While the girls play, you and Katie exchange pleasantries as best you can with the sisters’ mother and uncle. By the river, in the shadow of the cathedral, as the sand mills round and round, molecules of Casablanca exchange bits of information with molecules of New York.  Mother and uncle are here visiting Bouchra and Kautar’s grandfather, who lives in Bobigny. Uncle is a computer technician. When it comes time to go your separate ways, he proudly gave you his email address. You take a picture of the girls standing by the Seine and promise to send a copy.

We returned to Paris, and Notre-Dame, en famille, for five years in succession. This journal entry dates from 2003:

​July 2
Hard to imagine that Gwen is due for another birthday soon. For her tenth last year, she saw the Bastille Day fireworks from a terrace on the Tuilleries overlooking Place de la Concorde. Perched on your shoulders. She’s too big to carry that way for long now, and soon she’ll be too cool to want to be lifted up. That’s how it should be if you’ve done your job.

Her nearly-eleven-year-old eyes home in on different things than yours do. You go to the same places, walk the same streets and she notices an altogether different set of signifiers. And what she finds is always grist for her mill. While you browse the Rai music CDs in the giftshop of the Institute du Monde Arabe, she sets about teaching herself French the old fashioned way—by reading the comics. Between the images, idioms and the slapstick humor, Gwen’s hooked—she must have one of the books in the Malika series, even if it costs nearly eight Euros. She offers to pay for it out of her allowance. We’ll see, you say. Have a look for yourself.

Not difficult to spot the protagonist: a shapely, streetwise French-Algerian girl on the cusp of womanhood. With her lower lip set in a perpetual pout and pigtails sticking up like rabbit ears, Malika Secouss (earthquake)—wears outsized black parachute boots and romps with unrestrained joie de vivre through an ongoing comedy of errors set in and around her home turf, La Cité des Pâquerettes (daisies), a bunker-like Corbusian highrise banlieue.  Backed up by her motley copains and dogged by her brainy kid sister Zouli, Malika’s an authentic late adolescent—brash, impulsive and deeply clueless.  But, like a proper heroine, she triumphs by pluck or luck, and never fails to get the better of the National Front goons and racist flics who hassle her—sometimes by virtue of a well-aimed kick in the groin: GNOK!

There are ten or so books in the series, all written and drawn by Tehem, but this is the particular one Gwen wants. Terrific visual style, lots of vernacular-filled word balloons. Eight Euros. Well, it’s big, full color and hardcover. Sure, why not?

A cloudburst as you walk along the embankment near Notre-Dame, so you take shelter under Pont Neuf. When the rain passes, Katie steps out and starts to sketch the grotesque faces carved into the masonry of the bridge arches. Clever how they’ve hidden the lighting behind panels painted the color of the stonework itself.

You wipe a bench dry and sit with Gwen waiting for Katie to finish. Gwen reads Malika and you quarter a peach. Katie puts away her pad. As you get up you notice you’ve been sitting on some magic-markered graffiti, nearly worn-away by the friction of your jeans and countless other asses. But still visible:  Je décrète l’état de bonheur! “I decree the state of happiness.” 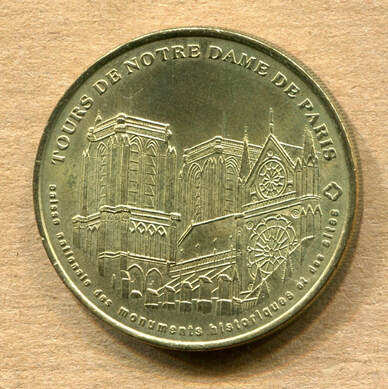 ​​As of this writing, in late April, 2019, the two towers, rose windows and a colony of some two hundred thousand bees inhabiting hives on the roof of Notre-Dame survived the blaze.
​​
Return to Extra!
Powered by